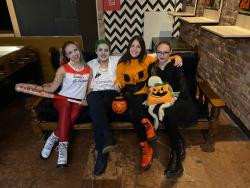 As november approaches, we are preparing for the scariest party of the year, for the Halloween Party. In one of the most popular events of the semester both hungarian mentors and foreign students can show off their creativity and put on frightening costumes. But for that they had to think about the right outfit and makeup long before the party. The Board members of ESN Miskolc also made the necessary preparations. We pre-booked the location, which was decorated thematically for the party. We bought the prizes for the winners of the costume competition and brought thematic gums for the participants of the event.
The Halloween party was held on 28th of october this year. The venue of the event was the „Blue Bistro” hall in Rockwell Klub located at University of Miskolc, in where we all could comfortably fit. More than a 100 people showed up at the party. Besides the Erasmust students we also invited foreigners of the scholarship ’Stipendium Hungaricum’. It offered an opportunity for the participants to make new acquaintances from all over the world. During the night we could see wide variety of creative costumes, special makeups and masks. We ordered pizza at the local „Blue Bistro” for dinner and we offered them a drink as well.
After dinner everyone found the right entertainment option for themselves. Beyond the huge conversations, there were participants who played cards, table soccer or billiards. Of course, taking photos with the special costumes was also an option. In addition, we also prepared a quiz for our foreign students and everyone really enjoyed it. At the end of it 2 teams were rewarded as the winners.
Of course the students with the most creative costumes won prizes this year as well. In order to avoid conflicts we decided that the Board members of ESN Miskolc should select the winners. We selected 6 students totally, both foreigner and hungarian students. The winners – Osama Alkhayyat, Rohit Balaji, Sabir Ismayilzada, Rashed Rashed, Nikolett Szabó and Fruzsina Sütő – wore such costumes like vampires or characters like Harley Quinn and Joker. They received a pumpkin lantern full of gums and a personalized certificate as prizes.
A dress-up dance party began at 11 pm in the Rockwell Klub’s halls, in which any student of the University of Miskolc could participate. In this case the foreign mentees had the opportunity to meet other hungarian students during the party.
As in previous years, this year’s Halloween party went very well, both mentors and mentees had a great time at there. During the event the place was filled with conversations, lots of laughter and fun. We can recall memories of this great evening anytime with the help of the photos which were taken there. 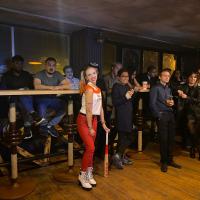 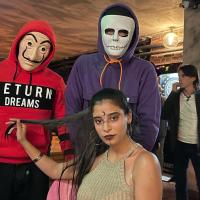 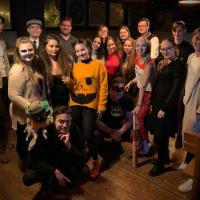 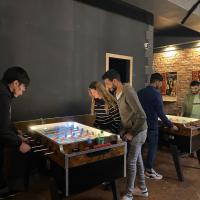 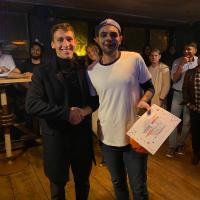 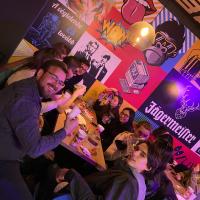 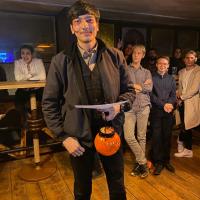 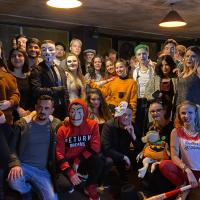