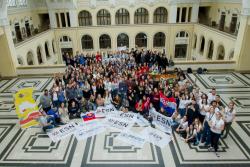 I could not believe the day had actually arrived. I have been waiting for it for three months, and it managed to exceed all of my expectations. Frankly saying, it was the ESN experience itself.

The Central European Platform is one of the Erasmus Student Network’s five annual platforms – an event for all the Central-European ESNers to come together, get to know each other, learn about the international level of ESN, attend different sessions and workshops, exchange their experiences and best practices, and, of course: to have a good time! With nearly two hundred participants from eight countries, CEP is the second largest event for these countries in a year –an event every ESNer should visit at least once in their career.

I really love training events. You can always learn something new, develop your skills and last but not least: meet inspiring people. However, I have never been on an international event before, and that made me nervous. I was unsure whether I can make up to an appropriate representative of my section and a valuable member of the Hungarian delegation. I had no idea how am I going to contribute to the topics of the international level with only a year of experience in ESN. But then, on a rainy Thursday 31st of October, I arrived in Debrecen, where the local ESN section hosted this year’s Central European Platform, and everything just clicked into its place.

The event started with a grandiose opening dinner on Thursday night, where all the delegations had the chance meet for the first time and to get to know the organizing chair of the event: the awesome team of ESN Debrecen. Later that night, the ’90s party took place: a night-long programme stuffed with ice-breaking games, teambuilding activities, fancy dresses and good ol’ retro music. It is the miracle of ESN, that nearly two hundred strangers can sing and dance along as a large family after only four hours that they met each other for the first time in their lives – and being a part of that family is an indescribable feeling.

Friday revolved around presentations. João Vasco Oliveira, the treasurer of the International Board and the Content Team of ESN held several interesting presentations about, from the everyday life in the ESN House through the importance of a corporate visual identity for the network to HR problems of the network and the sections. I believe each participant has learned something new and useful, that we could bring home to our sections to develop ourselves. About Friday’s social programme: have you ever been on an international dinner? Well, a Cultural Jamboree looks just like that, but it is even better! Eight tables filled with traditional foods and drinks of each nation, traditional costumes – what else could you ask for? Well, potentially a spontaneous folk song battle between the Polish and the Hungarian delegation; an experience none of us will ever forget in our entire life, that’s for sure.

Saturday was the day I have been waiting for the most. On these days were the workshops, those “small” (three hour-long) trainings where you can learn the most about several topics, develop your own skills and hear new opinions. There were fourteen workshops altogether in a two-round system, meaning that each participant had the chance to take part at two different workshops. To be honest, I had expected the most from these workshops – workshops can often be the make-or-break points between an exceptional and an average event – but the facilitators did not leave us disappointed. I believe that I can implement the new knowledge of both workshops I attended to and that they have developed me as an individual as well.

However, the real pinnacle of the whole four days was the Gala Dinner. I will never forget the whirl of ball clothes in the imposing Grand Hall of the University of Debrecen and the huge birthday cake for the 30th anniversary of the Erasmus Student Network – this whole night had a simply different atmosphere. And when I thought that this night, this event could not be better - hundreds of people went to play JustDance together until dawn. Since that night all of the participants share something in common: when Bohemian Rhapsody gets played anytime, anywhere, we will always think about the end of a very special day in Debrecen.

Sunday is about saying goodbye. The closing ceremony ends with a standing ovation, and the well deserved one. CEP 2019 was an incredible event, an incredible work from a fantastic Hungarian ESN section. I am standing in the last row, thinking about what will I bring with myself from these four days. Knowledge about the international level? Better understanding of our organization? The best practices of the foreign sections? The new friendships I have made? Well, all of that, yes, but something more – memories. Memories that are special because of all the people who share them with me. Memories that will motivate me through the low times and motivate me to work harder each day. The ESN experience itself.